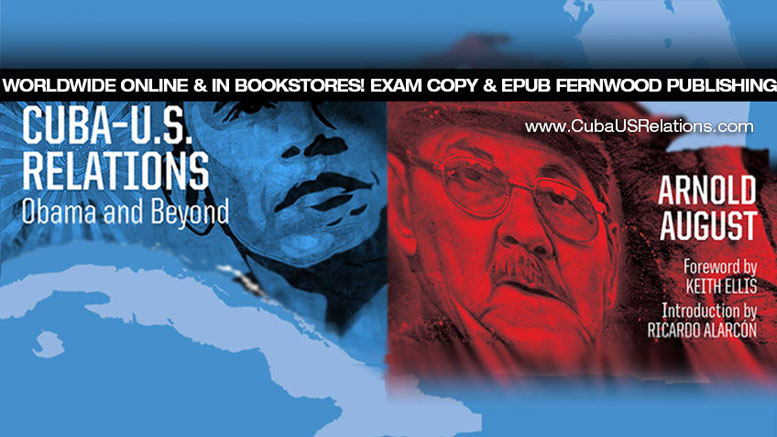 Canadian author, journalist, and lecturer, Arnold August has been traveling across Canada for the launch of his latest book, Cuba – U.S. Relations: Obama and Beyond (Fernwood Publications 2017).  He is currently in Havana for the Cuban launch of the book at the only English-language bookstore in the city, Cuba Libro. It is the author’s third publication on Cuban politics.

August, who lives in Montreal, holds an M.A. in Political Science from McGill University. He has an extensive background on Cuba. The author is not a “newcomer” to the Cuban scene like the many who claim to be “experts” on all things Cuban. In fact, August has been going to Cuba since the early 1990s during the time remembered as the “Special Period.” He fell in love with the Cuban political system and its people.

He immersed himself in Spanish in Montréal in order to prepare his first book on Cuba. Thus, by 1997, he was spending extensive time on the Island for preparative research for his books and academic papers.

His first book, Democracy in Cuba and the 1997-98 Elections

(1999), resulted after having attended every step in the Cuban electoral system. This was followed by his second, Cuba And Its Neighbours Democracy In Motion

Cuba-U.S. Relations: Obama and Beyond

is widely acclaimed by Cuban specialists including Ricardo Alarcon who wrote the Prologue.

In 2013, he was awarded the Félix Elmuza Award for outstanding journalism from the Association of Cuban Journalists.  As a journalist, August has been published on many English and Spanish websites from the United States, Canada, Cuba, Latin America and Europe.

This autumn, August has been busy with the launch of his book Cuba – U.S. Relations: Obama and Beyond. The tour began in Ottawa in September. In October, he was in Montreal and Toronto. August has been speaking on Trump’s Cuba policy in light of the recent current events.

The Toronto panel was a full house and featured speeches by Keith Ellis (University of Toronto) and Julio Fonseca (York University). Elizabeth Hill, Co-Chair of the Canadian-Cuban Friendship Association was moderator. Tania López Larroque, Consul General of the Republic of Cuba in Toronto and Luis Acuña Cedeño, Consul General of the Bolivarian Republic of Venezuela in Toronto, gave welcoming speeches to the well attended event.

The book tour not only covers the major cities in Canada. Tomorrow the author will present his book at the Cuba Libro bookstore in the Cuban capital. After Havana, Arnold will return to Canada and make a stop at The People’s Coop bookstore in Vancouver.  On October 29 he will be giving a key note talk in Vancouver on the Cuba-US Relations book as part of the Che Conference in the city. He is very proud that the organizers of this annual event also requested that he leads a workshop on democracy and elections in Cuba featuring the signing of all three books. This multi-book signing is the first for the writer.

We asked Arnold what motivated him to write this book.  He told us that the motivation had its roots in the late 1960’s when he and other students at McGill University opposed the mainstream academic promotion of US-centric notions on political systems. In addition to this, since 2009, he’s been very active against the mainstream media disinformation regarding Cuba and its relations with its neighbour, especially in the realm of journalism.

The most recent of his books, but not the last one he assures us, zeroes in on the false premise that the new American Cuba policy consists of a real normalization of relations. How can it be so while the U.S. carries out a cultural war against Cuban socialist culture? He concedes it’s a complicated issue, but this is what makes the publication so unique.

The book launch is not only about promotion, it’s also about “giving back.” August is donating his royalties from the sale of the book at each event to help contribute to fund raising efforts led by the Canadian Network On Cuba (CNC) Hurricane Irma Relief & Reconstruction.

As a conclusion to this article, we’ve taken the liberty of adding the reviews and praise of the work coming from the international academic community:

An expert on Cuba, Arnold August offers a revealing view of the conflict between Washington and Havana and the foreign policy of the United States vis-à-vis the island. — Salim Lamrani, Sorbonne Paris IV University

This book could not have been timelier. With Fidel Castro’s death focusing outside attention on Cuba’s future and with Trump’s election throwing U.S.–Cuban “normalization” into question, Arnold August contests the common assumptions and public rhetoric about Cuban politics and about that “normalization.” — Antoni Kapcia, University of Nottingham

August provides the reader with a bridge across time and nations to understand the changes that have led to the “normalization” of Cuba–U.S. Relations and serves as a guide to the Trump future. — Helen Yaffe, London School of Economics

Here at last for English-speaking readers is a full overview of U.S. relations with Cuba from Cuban points of view. The book is essential background for understanding whatever President Trump has in store. — Cliff DuRand, Morgan State University

Arnold August is one of the foremost experts on Cuba and the 1959 Revolution, which continues to shake the world. In this new book, August puts forth a valuable, detailed account of U.S.–Cuba relations dating back to 1783 and continuing to the present time. August shows that this relationship has centred on the U.S.’s attempts, sometimes successfully, to dominate Cuba and exploit it as its own playground and, in the case of Guantánamo, as a maximum-security prison. As he shows, the 1959 Revolution broke the U.S. hold over Cuba, and the U.S. has tried desperately, and many times violently, to regain its control over the island. Obama opened diplomatic ties with Cuba for the first time in 50 years. August explains what this opening means for both countries, and where he sees U.S.–Cuba relations heading after the death of Fidel Castro at age 90 and the rise of U.S. President Donald Trump. For those who want a fresh and reasoned perspective on Cuba and U.S. relations — and with it a perspective very different from that which we get from the mainstream Western media — this book is a must-read. — Daniel Kovalik, teacher of international human rights, University of Pittsburgh, School of Law

In his third book, August highlights the many roadblocks on the way to normalization. Unlike many mainstream “cubanologists”, who are blind to imperial arrogance, he places the onus squarely on U.S. prejudices. Regime change remains the ultimate objective under a new disguise. A cultural war has been targeting the younger generations. New Plattists [those in favour of annexation to the U.S.] are showing up. August’s deft analysis, firmly grounded in a prolonged exposure to Cuban history and debates while mapping out the possible future developments, makes for an enlightening book. — Claude Morin, professor (retired) of Latin American history, Université de Montréal

Arnold August’s new book on Cuba dispels the propaganda and myths perpetuated by both the U.S. corporate media and the Obama administration and provides valuable insights into what we might expect from a Trump government in the post-Fidel era. August lays bare the realities of Obama’s policies toward Cuba by methodically revealing how his administration’s engagement with the island constituted a shift in tactics while retaining Washington’s decades-long objective of achieving regime change to bring the socialist nation back into the U.S. sphere of influence. It also highlights our narrow definition of democracy by challenging the repeated assertions that Cuba is a dictatorship. This book is a must-read for understanding the constantly evolving imperialist strategies of the United States, not only in Cuba, but throughout the world in the 21st century. — Garry Leech, independent journalist and teacher of international politics, Cape Breton University

Arnold August’s bristling collection of interventions vigorously debunks U.S.-centric misrepresentations of Cuban society and of Obama’s new ‘regime change’ strategy. It also engages critically with Cuban intellectuals and bloggers fighting in the ‘Cultural War,’ challenging the Revolution’s cohesion since the 2014 ‘normalization’ process began. With its withering anti-imperialism and comradely criticism of Cuban realities, this timely book will open many eyes and raise many hackles. — Steve Ludlam, was a senior lecturer (retired), University of Sheffield, and editorial board member, International Journal of Cuban Studies. Steve has since passed away.

Advertisement. Scroll to continue reading.
In this article:Arnold August, Cuba - US Relations 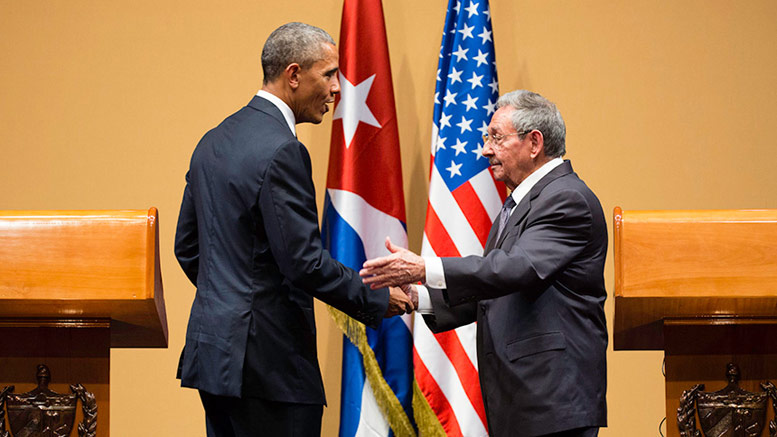 Castro Willing to Negotiate with Trump

The American press is reporting that Cuba’s President Raul Castro is willing to negotiate with President Donald Trump.  This is positive news in light... 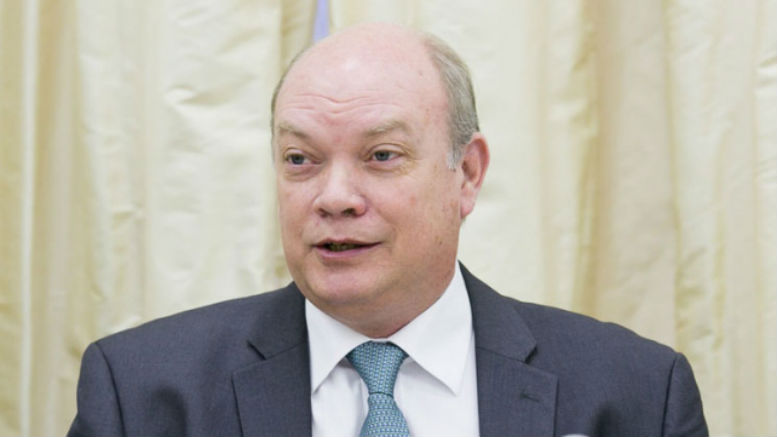 The Cuban Minister of Foreign Trade and Investment (MINCEX), Rodrigo Malmierca Diaz, ends his official visit to the United States today.  From February 15-18,... 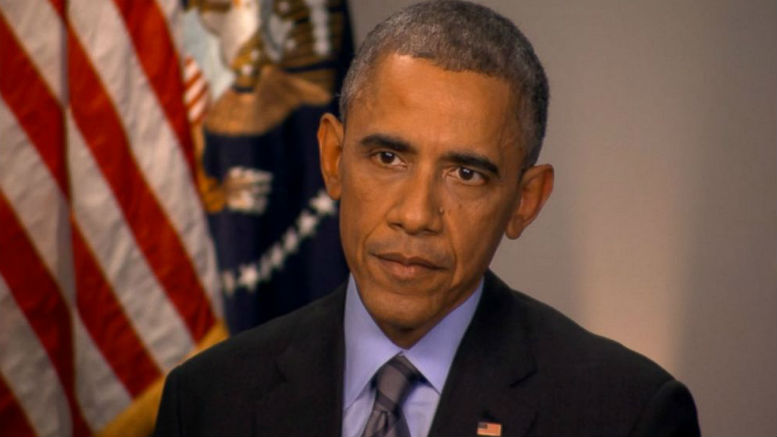