WebsiteFor nearly 30 years, U.S. Citizen Gary Heathcott has been traveling to his home-away-from-home: CUBA.  A retired advertising and public relations executive, Heathcott has been pushing to improve communications and relations between his birth-country and his adopted-country of Cuba.   Heathcott is the Director of Cuba Films and Cuba Medios and is accredited to the International Press Centers in Havana and Washington D.C.  For the past three years, Heathcott has served as the auctioneer at the prestigious Gala Dinner on the final evening of the Habano Festival in Havana, Cuba.  In 2016, his first auction effort in Cuba, Heathcott raised a record amount of money for the Cuban Public Health System:  €1.3 million. In 2017, he surpassed that amount by raising another €1.7 million. At this past February’s Gala, Heathcott sold 7 more humidors for €1.5 million bringing the total raised for the public health and research to €4.5 million! Internationally-known, his writings and documentary films about the country of Cuba, her people and Cuba’s trademark export—hand-rolled cigars—have been published in magazines and on networks around the world.  He has also been interviewed many times by other journalists from China, France, Canada, Japan, Spain, Germany, and others:  from U. S. television networks to the New York Times and dozens of other American newspapers.  He most recently contributed to Associated Press and Reuters news accounts regarding the U.S.’s potential lifting of the decades-old embargo.   Twenty-three years ago, Heathcott championed the effort of legally presenting a container of American-produced rice to the Catholic Relief Organization in Cuba, paving the way for U.S. to ease its restrictions with regard to selling food to the Cuban government.  The container of Riceland Rice from Arkansas was not only delivered to Havana, but Heathcott orchestrated U.S. news coverage of the event through an exclusive arrangement with ABC News correspondents.   In May 2016, Heathcott was invited to the U.S. White House and participated in a dialogue with OFAC, U.S. Treasury Department and Obama Administration officials, as they discussed various ways to advance American business opportunities between Cuba and the United States. Heathcott’s Cuban documentary films have been distributed world-wide and include such films as “The Passion of the Torcedor”, “Footprints in the Sand: Hemingway’s Cuba”, “El Ritual de Los Cohiba”, “Cuba’s Daiquiri—the Original”, and “The Future of Cuba: Her Youth”.  He has written more than 60 feature articles regularly appearing in major magazines in the U.S., Europe, and on-line, including SMOKE Magazine, American Cigar, SmokeShop Magazine, Tobacco International, and many more.   Heathcott has hoped for decades that the U.S. government would eliminate the world's longest-lasting economic embargo.  All the while, Heathcott has been relentless in his support of the Cuban people, consistently bringing American doctors and nurses to the island, along with wheelchairs, medical equipment, surgical devices, eyeglasses, all types of medicines and vitamins, computers, cameras, telephones, shoes for hospital workers, and even automobile parts for the aging American cars.  (The most unique item brought to Cuba by Heathcott?  A front bumper for a 1956 Chevrolet for the brother of a cigar factory employee.  The most expensive item?  A $34,000 pediatric video gastroscope to fit an Olympus Endoscopy System in a children's diagnostic hospital.)  And this was all done completely within existing regulations of the two countries involved. In his journalistic responsibilities, Heathcott has attended all 21 of Cuba's Habanos Festivals, the world's most prestigious gathering to celebrate the Cuban Cigar.  He has not only written news accounts of each week-long event, he has also participated in the Festivals in numerous ways, including serving as a judge for the very popular International HabanoSommelier Competition, where finalist from various countries around the world pair Cuban cigars with alcohol spirits. At the 2015 Habanos Festival, Heathcott was selected as the Habanos Man of the Year for Communications.  At the 2013 Habanos Festival, Heathcott was honored for one of his recent documentary films.  “El Ritual de Los Cohiba”, chronicling the 40-year history of Cohiba cigars.  It was the first-ever film detailing the complete story of how Fidel Castro desired to create a hand-rolled cigar for the masses while also establishing a secondary workforce by employing women exclusively for the production of the all-new cigar.  From the quiet birth of the original lancero to its famed voyage into outerspace to the grandest habano ever created—the Behike, the film was digitally recorded completely in Cuba and was presented in its native-tongue Spanish and subtitled in English. 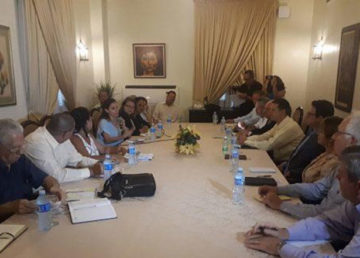 US Farmers Meet with Cubans over Trade Opportunities

An important U.S. – Cuba business conference, critical to opening markets for American farmers, took place in and around Havana, Cuba recently. Representatives from both countries participated. Now that U.S. exporters are allowed to use USDA programs to promot... END_OF_DOCUMENT_TOKEN_TO_BE_REPLACED