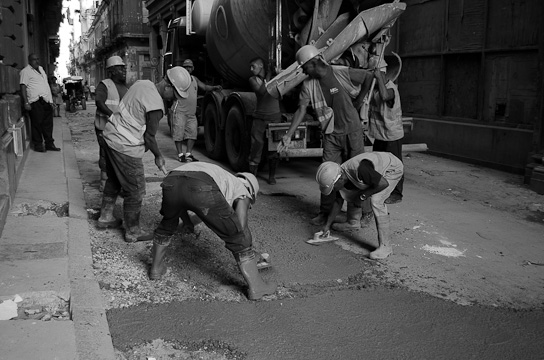 Caught between a rock and a hard place discusses the potential for Cuban-American talks and economic change:  this article by Peter Koenig first appeared the Global Research website.  Foreign investment to be sure, is needed in sectors such as communication technologies and computer science.  Development in the agricultural sectors would make Cuba entirely self sufficient in food production rather than relying on foreign imports of food (currently at 80%).

“On 17 December 2014, President Obama declared that 55 years of embargo didn’t work in bringing ‘freedom’ to Cuba. He proposed reestablishing diplomatic relations with the southern neighbor. An emotion of joy shook the world, especially Latin America. Raul Castro received wires and calls of congratulations. Cubans cheered “we won, we won!” – The US Congress right wing was not quite ready for this initiative and, indeed, there was no concrete mention of how and when the ‘blockade’ would be lifted.

Surely, Washington wants to impose its conditions. Washington conditions never serve an ally, let alone a foe. Washington conditions are always set to first serve the ‘national interest’- i.e. the interest of the US corporate and financial elite. Most vassals simply accept. Their happiness to be recognized in the Washington camp compensates for all the pitfalls Washington hegemony imposes. Just look at Europe with the TTIP (Transatlantic Trade and Investment Pact) which – currently being negotiated in secret! – if approved by the neoliberal European Commission, spells not only disaster for European generations to come, but means the EU being literally colonized by the US; slavehood for EU citizens.

Cuba will not accept such conditions, for sure. Cuba has already set some of its own conditions, one of them being the return of Guantanamo, originally and under past Cuban puppet governments a 99-year concession that has expired years ago. Guantanamo today is pure theft. The criminal capture of a piece of another country’s territory, so that no US law could be applied to the crimes committed there. Torture of so-called ‘terrorists’ and terrorist suspects in the US-stolen enclave of Guantanamo are well and alive. No US law can stop the crime. International laws are ignored by empire. Washington, the exceptional nation, is above all laws. If a judge, national or international, doesn’t conform, he is simply removed or eliminated.

Two days after Obama’s bold initiative, on 19 December 2015, he went to the Washington Press Club to tell a horde of puppet journalists, conservative politicians and onlookers that soft measures, like reestablishing diplomatic relations with Havana might be more successful in bringing the desired regime change to Cuba than more years of isolation. He couldn’t have been more direct and more honest about his intention. The Cuban Government and whoever else listened didn’t miss the point.

Isolation has been gradually fading over the past years. Russia and China and many ‘amigos’ in Latin America and Europe – Venezuela, Brazil, Argentina, Mexico, Spain, France, to name just a few – have established almost regular trading relations with Cuba. Despite the constant threat of ‘sanctions’ by empire. It is high time for the White House to change tactics if it doesn’t want to lose out to its arch-enemies Russia and China.”