Wow! Loving it! Fashion in Cuba and Art y Moda news.  From the press release by DiDomenico Designs – the first American fashion designer to showcase her fashion in Cuba.

DiDomenico marked a place in history by being the first American designer to showcase designs in Cuba since the embargo was put in place in 1960.

Dominick was approached by Cuban Trade representatives after showing in New York Fashion Week wanting to help strengthen trade between Cuba and the U.S. in a non political forum. And what better way to accomplish this than through the arts.

Developing new relations with this old friend of American trade has such sensitive intricacies. However, all is about to change on a big scale for the fashion industry for the Cubans and DiDomenico is helping Cuba pave new roads for trade in US market.

“There are so many ways to break barriers between countries that are at conflict. Fashion is one of those ways. I am passionate about how design moves people and ultimately moves the world,” says Dominick.

Head director of Arte y Moda for the past 20 years, Juan Carlos comments, “Kelsy Dominick is not only the first American designer to show in Cuba since the embargo, but she is also the first to ever show in Arte y Moda’s entire history. Given of our history with the U.S. it is even possible she may be the first American ever…we are honored to have her.”

Right behind French designer label Chanel having just shown in April, the French have always been able to have access to the Havana platform. Americans however, are breaking into new territory and causing a stir of response.

“The level of difficulty getting to Havana not only as an American, but as a company was well worth the response of the people that came after,” reflects Dominick.

The Chanel fashion show was not for the people. Even the people of Havana were not permitted into the show. DiDomenico is changing that dynamic and made a fashion platform for the people, by the people.

Hard to avoid the politics of it all DiDomenico and the Arte y Moda team believe that the only way to break down that barrier is through the arts.

Arte y Moda is the largest fashion event in Cuba’s history. Standing for over 20 years, it has been acclaimed the highlight of Havana fashion and a global stage for inspiration. Many acclaimed artists and diplomats attend the event from countries all over the world.

Arte y Moda celebrated their 20-year anniversary in conjunction with Dominick’s showcase. The event was held at the National Museum of Fine Arts in La Habana, Cuba.

From our staff writers and editors. END_OF_DOCUMENT_TOKEN_TO_BE_REPLACED

From our staff writers and editors. END_OF_DOCUMENT_TOKEN_TO_BE_REPLACED

It started in November 1960 when Catholic priests handed out pamphlets to their congregations in churches throughout Havana. The priests said the information sheet, known as the Apocrifa, the Acts of Parents Authority, was proof the revolutionary government wa... END_OF_DOCUMENT_TOKEN_TO_BE_REPLACED 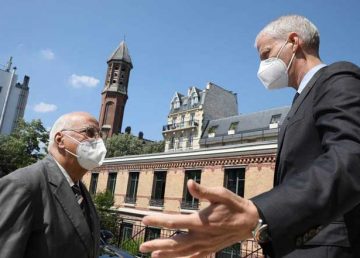 Representatives of the Paris Club group of Cuba creditors and a Cuban government delegation headed by Deputy Prime Minister Ricardo Cabrisas met in Paris on June 9. The parties agreed to defer payments under the previous agreement of 2015. Ricardo Cabrisas and... END_OF_DOCUMENT_TOKEN_TO_BE_REPLACED