Cuba has attracted a lot of international attention over the last couple of years since the relationship between the United States and Cuba has been in the process of re-examination.  As a result, the  Cuban tourism industry has been brought into sharp focus. Cuba’s ports, pristine beaches, and its famous rum and cigars are attracting massive attention in the media. One of Cuba’s most historically important ports, the Havana Hemingway Marina, run by the Marlin Nauticas y Marinas group, is slowly becoming a curiosity for those with big boats.  Marina Hemingway is Cuba’s largest marina, with the capacity to facilitate up to 400 vessels. Both American and foreign vessels are now docking in the Marina and fisherman from around the world participate in the celebrated Hemingway fishing tournament each year.

The Hemingway Marina is located in the Sante Fe neighborhood of west Havana, about 20 minutes by taxi to Old Havana.  Operated by the government agency Cubanacán, the Marina Hemingway is an up and coming world-class marina but not without its challenges today. For decades, the Marina was under utilized, leaving some of it in a state of disrepair. Today, realizing the full potential of the Marina, the Cubans are in the process of renovating and upgrading the Marina and its facilities.  The all inclusive resort, the Acuario is being renovated building by building.  A luxury hotel is also in the works.

There are plans in the works to build a 650-room 5 star hotel in the Marina.  It’s a joint project for a hotel to be named the “Hemingway Hotel.”  The hotel joint venture is between the Chinese and the Cubans, 51% held by the Cubanacan hotel group and the remaining per cent by China’s Suntine International-Economic Tradition Company.  Construction of the “Hemingway Hotel” should begin this year.

In the meantime, there’s a three star all inclusive resort called the Acuario located in the Marina.  The Acuario is a large resort with a swimming pool, bars and restaurants.  Some of the buildings of the resort are currently being renovated because of the expected increase in Cuban tourism, more visitors to the Marina, and the overwhelming need for more hotel rooms.

Four restaurants serving Cuban and Spanish food, a pizza joint and a bar can be found in the Marina area. For those who wish for more variety in dining, there’s more choice in nearby Miramar or some 20 minutes away by taxi to Old Havana.

What’s at the Hemingway Marina?  Currently there are three channels with 210 berths.  There’s docking for vessels up to 230 feet, a maximum of 12 feet depth are available.  Amenities and services at the Marina Hemingway include vessel repairs, fuel, 110/220 shore electricity, 24 hour security, a marine shop where one can buy cigars, rum and beer, and other supplies, fresh water, ice, showers, swimming pool, laundry facilities, internet access, and telephone access can be found.

Approaching and entering into the Hemingway Marina can be tricky for sailors.  Mariners are warned not to approach at night time.  The following guide is information for mariners planning to enter the Marina.  Port authorities are courteous and helpful.

As vessels approach the entrance they should contact the port captain over SSB 7462 or through VHF channel 77. Mariners will find that it is best to approach the entrance of the marina when conditions are relatively calm as the narrow channel has shallow coral on each side and could provide some challenges. Navigating the entrance is further complicated at nights when Havana’s city lights in the background are indistinguishable from the channel marker lights. Due to these complexities, and the very real dangers that result, night entrance to Marina Hemingway should be avoided at all costs.

Some more photos of the Hemingway Marina: 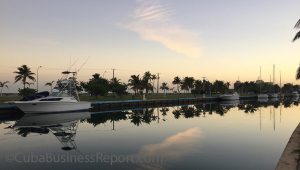 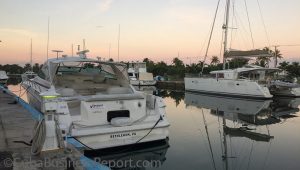 Update to this article:  The Chinese-Cuban joint venture is not confirmed for the 5 star hotel to be constructed at the Hemingway Marina.  In addition, we cannot confirm that the hotel will be called the “Hemingway Hotel.”  We are currently verifying this information and will further update our readers when more information is known.

NEYROS, a company of the Russian Federation, is a research institution in the SKOLKOVO Innovation Center of Moscow. The Company conducts research and development for new pharmaceutical drug candidates to treat neurodegenerative disorders such as age-related De... END_OF_DOCUMENT_TOKEN_TO_BE_REPLACED

The Ministry of Foreign Affairs of the Russian Federation has just announced the relaunch of the project to modernize the Cuban railroad infrastructure. RZD International LLC and the Union of Railways of Cuba originally signed a contract for reconstruction and... END_OF_DOCUMENT_TOKEN_TO_BE_REPLACED