Following the announcement on Friday by the United States’ Department of Commerce of the suspension of commercial flights to all destinations in Cuba except Havana, the Center for Democracy in the Americas (CDA), Cuba Study Group (CSG), Engage Cuba, LAWG, OXFAM, and the Washington Office on Latin America (WOLA) have issued a joint statement in response.

The Center for Democracy in the Americas, Cuba Study Group, Engage Cuba, LAWG, OXFAM, and WOLA denounce the announced halt to commercial airline service to cities outside of Havana and call on Congress to pass the Freedom for Americans to Travel to Cuba Act of 2019.

Marguerite Jiménez, Director for Cuba at WOLA, says, “The Administration’s actions are punitive and cruel to the Cuban people. The policy will not accomplish any of the Trump Administration’s goals and instead will continue to make life more difficult for Cubans on and off the island. Further, this policy will only serve to exacerbate inequality on the island and economically isolate Cubans living outside of Havana, cutting them off from valuable sources of revenue from foreign travelers as well as connections to family.”

Linda Delgado, Director of Government Affairs of Oxfam America, says “This administration is blind to the impact of its cruel policies. It’s sickening to be witness to another heartless and counterproductive act that will do nothing but hurt families and good people. We urge Congress to expedite passage of the travel bill.”

Mavis Anderson, Senior Associate at the Latin America Working Group, says, “In a string of cruel actions against Cuba, this administration has just announced another restriction to cause harm and hardship to the Cuban people, at the same time professing to act for their benefit. This denial of Cuban Americans’ and all US citizens’ right to travel to a number of cities throughout Cuba will backfire. These punitive policies will not cause the Cuban people to rise up against their government. It’s time for US citizens to make the message to this administration loud and clear by energetically supporting the travel bills currently before the House and Senate by calling our members of Congress and even through taking to the streets.”

James Williams, President of Engage Cuba, says, “This backroom move at 5 pm on a Friday is a weak and needlessly cruel blow to Cuban families. How are Cuban-Americans supposed to visit to see their loved ones if there are no flights to most of the country? We understand that the politicians making this policy have likely never been to Cuba, but even they should be able to look up that the vast majority of Cubans don’t live in Havana. It’s another sad day for the Cuban people who are being deported at record numbers, denied political asylum and now can’t visit their families.”

Ricardo Herrero, Executive Director of Cuba Study Group, says, “Suspending flight routes from the United States to all Cuban destinations outside of Havana is an inhumane policy that will cause great harm to Cuban families and American travelers. Announcing it at 5:00 pm on a Friday means that Trump administration officials are fully aware of this fact. Ending these commercial flights will compound the hardships already faced by Cubans who don’t live in the capital city. Furthermore, this feckless policy will not advance any discernible national security interest of the United States. It will not persuade the Cuban government to end its support for Nicolas Maduro and will further undermine America’s ability to credibly champion human rights in the region. We call on President Trump to immediately reverse this misguided policy. If the calculus behind today’s announcement is that it will help shore up Cuban-American support for the president’s re-election campaign, he would be well-advised to think again.”

Emily Mendrala, Executive Director of the Center for Democracy in the Americas, says, “This administration’s obsession with Cuba strikes another blow to the interests of the American and Cuban people alike. Think of some of the collateral damage done by today’s move: Cuban Americans adding hours – possibly days – to their travel time to see family; private businesses and entrepreneurs losing important streams of revenue; students, scientists, and researchers facing undue hurdles to travel to cities outside of Havana; and uncertain economic consequences that will come with confining U.S. travelers to Cuba’s capital city. This arbitrary move seems more intent on scoring political wins and reversing the Obama legacy than achieving any foreign policy goals.”

The Freedom for Americans to Travel to Cuba Act of 2019, introduced by Senator Leahy in the Senate (S.2303) and Representatives McGovern and Emmer in the House (H.R.3960), would allow United States citizens and legal residents to travel between the United States and Cuba.

From our staff writers and editors. END_OF_DOCUMENT_TOKEN_TO_BE_REPLACED

From our staff writers and editors. END_OF_DOCUMENT_TOKEN_TO_BE_REPLACED 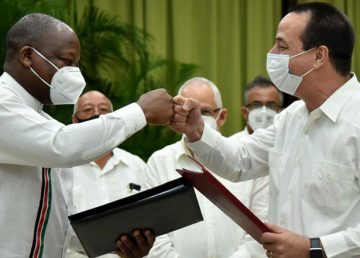 Kenya and Cuba have signed an Inter-Ministerial Cooperation Agreement that extends the provision of medical services and the training of doctors in the African nation. The original agreement was first signed in April 2018. Kenya’s Senator MuthaiKagwe and Cuba’... END_OF_DOCUMENT_TOKEN_TO_BE_REPLACED

The Central Bank of Cuba (BCC) announced a new set of measures for credits and financing to farmers, to begin immediately. The measures come into force because of the problems that emerged and the government’s need to resolve the matter. Francisco Mayobre Lenc... END_OF_DOCUMENT_TOKEN_TO_BE_REPLACED