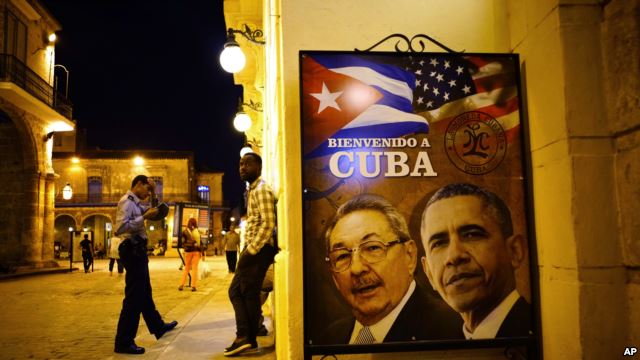 Both the Cuban and the US government will be holding press conferences for the media.

The White House Official Schedule of President Obama’s official visit to Havana, Cuba is as follows:

On Saturday, the President has no public events.

On Sunday, in the afternoon, the First Family will travel to Havana, Cuba. While in Cuba, the President will work to build on the progress we have made toward normalization of relations with Cuba – advancing commercial and people-to-people ties that can improve the well-being of the Cuban people, and expressing our support for human rights. The departure from the South Lawn is open press, and the arrival at Joint Base Andrews will be covered by the travel pool.

Later in the afternoon, the First Family will arrive in Havana, Cuba. The First Family’s arrival at the Jose Marti International Airport is open to pre-credentialed media.

Following the First Family’s arrival, the President and the First Lady will meet with Embassy personnel and families. There will be travel pool coverage of the President’s remarks.

Afterward, the President and First Lady will take a walking tour of Old Havana. There will be travel pool coverage of the tour.

The First Family will remain overnight in Havana, Cuba.

On Tuesday, the President will deliver remarks to the people of Cuba at the Gran Teatro de La Habana Alicia Alonso. Later in the morning, the President will meet with members of civil society. Following the President’s meeting, the First Family will attend a Major League Baseball exhibition game between the Tampa Bay Rays and the Cuban National Team at the Estadio Latinoamericano.  Americans and Cubans share a love of baseball, and this is yet another powerful reminder of the kinship between our peoples as well as the progress we can achieve when we leverage those natural ties. In the afternoon, the First Family will depart Havana, Cuba and travel to Buenos Aires, Argentina where they will remain overnight.”

In this article:Obama in Cuba, Obama visit to Havana, schedule