Once Upon a Time at the Capitolio

Published 4 years ago T.K. Hernandez4y ago

El Capitolio Nacional – Havana’s National Capital building is one of the most photographed buildings in the city and rightly so.  It is one of the greatest symbolic examples of historical architecture in Old Havana.  Once upon a time, the Capitolio was open to the public, but that was back in the old days until 2010.  Since that year, the Office of the City Historian, Cuban craftsmen, Italian and Spanish investors have been working to restore the building to its former glory. Once upon a time, there was an elegant café on the Capitolio terrace. It was open to the public.  It was shaded by the massive Roman columns in the front.  The café was decorated with the green fronds of potted palms.  Tables were…

T.K. Hernández is co-founder and editor at Cuba Business Report. Her work has been published in various online news media publications. She has suppo... END_OF_DOCUMENT_TOKEN_TO_BE_REPLACED

T.K. Hernández is co-founder and editor at Cuba Business Report. Her work has been published in various online news media publications. She has suppo... END_OF_DOCUMENT_TOKEN_TO_BE_REPLACED 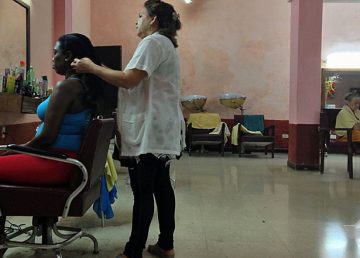 On February 6, Cuba’s Council of Ministers approved the expansion of the list of allowable types of private sector jobs from 127 to over 2,000 activities. The move will provide a needed boost to the slumping economy and create an increase in employment statist... END_OF_DOCUMENT_TOKEN_TO_BE_REPLACED

Ecotaxis, the new three-wheeled emissions-free vehicles now in circulation on the streets of Havana will provide electrically powered taxi services on two central routes. These EcoTaxis, a fleet of 23 orange cars in all, are not only an eco-friendly method of ... END_OF_DOCUMENT_TOKEN_TO_BE_REPLACED