The Russian Foreign Minister Sergey Lavrov is on an official visit to Cuba. Havana is the first stop on the diplomat’s tour of Latin America.

The Director General of Bilateral Affairs of the Cuban Ministry of Foreign Affairs, Emilio Lozada Garcia and the Russian ambassador to Havana, Andrei Guskov greeted the minister upon his arrival.

On the one day stop in Havana, Lavrov is to meet with his Cuban counterpart Bruno Rodriguez Parrilla. The Cuban Foreign Minister last visited Moscow in May.

Trade and economic cooperation, cultural and humanitarian issues and regional and global issues will be on the discussions’ agenda. Lavrov is in Havana to continue the process of strengthening bilateral relations between the two countries.

After the discussions in Havana, Lavrov will head to Brazil to attend the BRICS (Brazil, Russia, India, China and South Africa) foreign ministers conference. He will participate in a series of bilateral meetings.

From our staff writers and editors. END_OF_DOCUMENT_TOKEN_TO_BE_REPLACED

From our staff writers and editors. END_OF_DOCUMENT_TOKEN_TO_BE_REPLACED

On November 19, we spoke with Ollie Aslin (director/producer/editor) and Gary Lennon (director/producer) on their latest film Castro’s Spies, (Gambit Pictures 2020). The film had its World Premiere at the Cork International Film Festival and is screening at th... END_OF_DOCUMENT_TOKEN_TO_BE_REPLACED

“There will be a Festival, and it will be in two doses,” the president of the Havana Film Festival (International Festival of New Latin American Cinema), Iván Giroud Gárate, said in an exclusive interview. Inspired in the current context of the COVID pandemic,... END_OF_DOCUMENT_TOKEN_TO_BE_REPLACED

The problem with reviewing a film like Hubert Sauper’s Epicentro, currently on the promotional circuit, is that many of the things shown in the film are true. The devil, as always, is in the details and how they are presented. I happened to see Epicentro in Ut... END_OF_DOCUMENT_TOKEN_TO_BE_REPLACED

A stunning online exhibition of photographs titled “EROI DEL SILENZIO” by photographer Fabrizio Sansoni, documenting the work of the Henry Reeve Medical Brigade in Italy took place earlier today. Some of these powerful black and white images can be viewed on t... END_OF_DOCUMENT_TOKEN_TO_BE_REPLACED 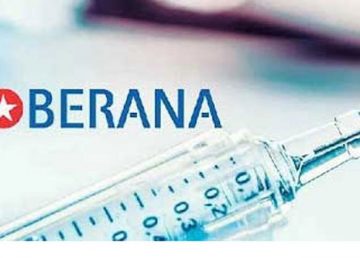 Cuba’s Soberana vaccine candidate has demonstrated a 62% efficacy rate in a two-dose schedule, BioCubaFarma announced on Saturday. Results are pending for the third dose with the Soberana Plus booster. “In a few weeks we should have the results for the efficac... END_OF_DOCUMENT_TOKEN_TO_BE_REPLACED

The Ministry of Foreign Affairs of the Russian Federation has just announced the relaunch of the project to modernize the Cuban railroad infrastructure. RZD International LLC and the Union of Railways of Cuba originally signed a contract for reconstruction and... END_OF_DOCUMENT_TOKEN_TO_BE_REPLACED