The United States Agriculture Coalition for Cuba (USACC) has taken the first step to return to the policies of the Obama era. In a letter known as the “Biden-Harris Transition Letter,” the Coalition has asked newly-elected President Joe Biden to embrace policies that support the development of beneficial relations between the agricultural sector of both countries.

As a president who served under Obama, facing an economy hit by the Coronavirus with plans to recover that economy, the request should be well received by the current administration.

There is no doubt the return to a more pragmatic position regarding on Cuba will be the keynote of the relationship between the U.S. and its neighbor.

The imbalance between U.S. imports and exports is undoubtedly one of the biggest challenges for the current administration. In 2019, the U.S. trade deficit was $576.9 billion, according to the U.S. Bureau of Economic Analysis. In November of 2020, it increased to $68.1 billion making it an important objective in the work of the new administration.

Biden has repeatedly indicated his interest in boosting the U.S. production of goods because of the existing trade imbalance.

Opportunities for the Agriculture Sectors

For some analysts, Cuba appears too small when compared to other actors in the U.S. economy. Considering the current situation, there are no small markets. Opportunities should not be wasted.

The conditions on the island where there is not only a market for the purchase of over two billion dollars in food, there is also the potential for investment in the Cuban agriculture sector which can not only replace those imports but also be a source of exports to other countries including the U.S. The political considerations that point to American interest in getting closer to Cuba may be factors that help tip the balance so the new administration takes steps forward in a more dynamic trade relationship.

In its letter to the American president, the USACC urges: “… that U.S. farmers, businesses, private organizations, NGOs and universities work with Cuban counterparts on the challenges of increasing productivity, adapting to climate change and building sound trade strategies“.

The letter also points out that: “the possibilities available to the private sector in Cuba to import and export, as well as the invitation offered by the island to foreign investment in private agricultural cooperatives, represents an opportunity for Americans to help in the growth of this sector.”

The US Agriculture Coalition closes its letter to the president with the request, “ … to take early action to restore the Cuban Assets Control Regulations (effective January 20, 2017) and suspend Title III of the Helms-Burton Act, important regulatory steps for U.S. agriculture and business in general.” 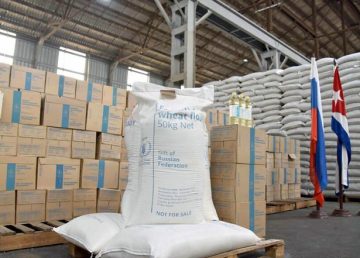 Cuba has received a donation of food aid from the Russian Federation through the United Nations World Food Program (WFP), the food-assistance branch of the United Nations. The shipment of food aid arrived on Thursday in Havana. The ceremony was held at the Dis... END_OF_DOCUMENT_TOKEN_TO_BE_REPLACED

According to information from executives of the Unión Nacional Eléctrica (UNE), Cuba’s strategy for electricity generation is to move from the use of fossil fuels to renewable energy sources. A recent investment by a Canadian company furthers the goal. Deltro ... END_OF_DOCUMENT_TOKEN_TO_BE_REPLACED