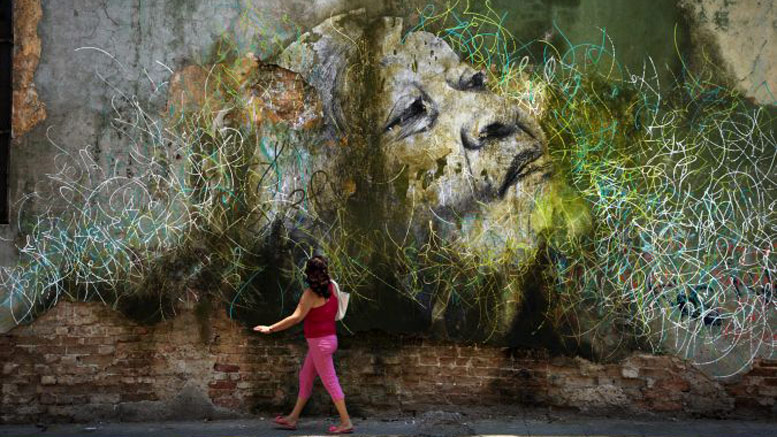 Image courtesy: The artist at www.jr-art.net

Surcos de la ciudad, or “Wrinkles of the City,” was a stunning urban art project created for the 11th Havana Art Biennial in 2012.

Invited by the Wifredo Lam museum to contribute to the Art Biennial of 2012, the crumbling architecture of Havana forms the backdrop to the murals.  Wrinkles of the City was a collaboration between the two artists, JR, an artist from France and José Parlá, a Cuban American artist.  Havana’s worn, decaying buildings bear the portraits of 25 older people who have lived through and endured the history of the city.

The video was also directed by the two artists who painted the murals on the walls.  It features their work, the artists’ process in the creation of the art on the walls as well as conversations with the people who were photographed.

The images on the broken facades of buildings can still be witnessed on the buildings still standing in the neighborhoods Old Havana, Central Havana and Vedado.

“In 2012, French artist JR and Cuban American artist José Parlá collaborated on The Wrinkles of the City – Havana, Cuba: huge mural installations undertaken for the Havana Biennale, for which JR and Parlá photographed, and recorded 25 senior citizens who had lived through the Cuban revolution; creating portraits, which Parlá interlaced with calligraphic writings and abstract painterly gestures. This is their film collaboration by the same title documenting their experience.”

In this article:art in Havana, José Parlá, JR, Wrinkles of the City